NOCONEX15! Call against the militarisation of our lives 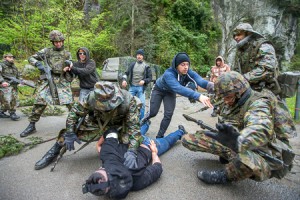 From the 16 – 25 September the Swiss army will be doing an exercise called <CONEX’15> in the North East of Switzerland. This exercise is to prepare the troops for a real emergency situation. While Switzerland and the European Union gladly assist in the drowning of thousands of migrants in the Mediteranean, the exercise in question is filled with cynism; we prepare and learn to defend against a real invasion and which the army gives us a scenario to anticipate:“ A Europe of the future, with new countries and new borders, is experiencing an economic crisis. The consequences of this crisis spreads also to Switzerland: limitation of reserves, extension of black markets and criminal organisations. Food, oil and gas stocks become targets for sabotage and pillage. Ethnique tensions bring an increased stream of refugees into Switzerland.“

The scenarios of threat

5000 soldiers will be deployed around Basel. The surveillance of the border and `telecommunication infrastructures, electric networks and food distribution`, which are the most threatened, will be the centre of this exercise. This spectacle will be supported by the ports Rhenans Swiss, the University hospital and the Federal Railway (CFF). An Exposition called `Your Army` will take place at Muttenz from the 19 – 22 September at Muttenz to give an overview of the situation and show the tax payers what their money is spent on. All thoughts about the treacherous system that creates the crisis and those who benefit are ignored. While it is the question of a ‚Europe of the future‘ and an ‚impending economic crisis‘, the fact that we are in this situation right now is overshadowed. The disintegration of the european economic zone is not fictional and the pressure exerted on Greece is very real. But this is a permanent state and not a crisis.
Even if Switzerland does not bleong to the European Union and washes it’s hands of it, this exercise is a clever tactic to profit from the situation. The consolidation of a repressive migratory regime, supported by the construction of federal camps is accompanied with the protection of the Helvetique financial stronghold that is Switzerland. Behind the diplomatic neutrality and democracy the co-production of global poverty continues through financial speculation on raw materials, expropriations caused by Swiss patent laws and the supply of weapons to conflicts.

The Protection of Privileges

The scenario elaborated by ‚CONEX‘ 15 attempts to legitimise the existence the existance of the army in a neutral Switzerland. A war against a foreign country no longer gives reason to have a Swiss army. For the past 20 years maintaining order and policing is the declared mission of the army. So it is ethnic conflicts elsewhere that provoke the migratory flow of refugees towards rich Switzerland. A rapacious population will come and take our resources, driven by the economic crisis. The notion of  ‚interior enemies‘ and ‚ criminal organisations‘ brings to the imagination a war of everyone against everyone, barbarians and brigands  from here and elsewhere against the ediface of civilisation, against law and order.
To us this is simply a war of the rich against the poor, poulation control and counter insurrectionary tactics to garuntee privilege and the conservation of power.

To govern is to control

The scenarios of this type legitimise and permit counter-insurrections against poor populations whom are largely excluded from the advantages of the system. Reinforced border controls, CCTV in cities and shows of force such as CONEX‘ 15 attempt to establish a feeling of stability and security around the existing conditions of life. The state of shock produced by these catastrophic spectacles is a tool of controlled destabilisation which aims to maintain public order. They leave us without a voice and powerless, wanting more security and protection, colonising our spirits and becoming part of our daily life.

Desertion is better than obedience!

We do not want to be governed by a paranoid state. We do not want to let ourselves be shut into the established order. We respond to Capital and exploitation by solidarity, to powerlessness with collective action. We are not idiots who do not know how to take action and we will not passively stand by and watch this war the State is fighting against the poor and others excluded who have ’no documents‘. So we invite all anti-militarists, anti-authoritarians and more largely those who do not have access to the privileges jealously gaurded by the elites, to come to Basel from 16 – 25 Septembre. We invite you to not let our lives and cities in which we live to become militarised. Hang banners and posters from your windows saying ‚CONEX get out!‘. Refuse soldiers eating in your bars and cafes, refuse them service, They serve the elite, not us! Engage in the disruption of the military exercise. Show them they are not welcome. We say to them: „Desert!“
Demonstrations, actions and discussions
Several demos and actions are already prepared between the 17 – 20 September. Take note of the date and come to Basel. There will be contact points to inform you there. Reflect on ways in which you can act adequately and choose the appropriate means. Not only in the days and weeks before but also during CONEX‘ 15, we need to open spaces to find eachother, to exchange and deepen the substantive issues. The military exercise will only last a few days but our combat against all forms of domination is a daily one. Because it is not enough to revindicate the abolition of the army, or to critsize the discreet participation of Switzerland in wars everywhere or it’s support of the military  or the denunciation of the arms lobby.

Let us develop solidarity and mutual co-operation instead of threats and fear and the maintenance of privileges.

Against this world of dominations,  Build our worlds…